Help! My Peaks Look Strange - Fronting and Tailing in GC

Dr. Know over 2 years ago | Last modified by

Dr. Know over 2 years ago

Overloading effects are strongly related to the sample capacity of stationary phases in gas chromatography. If this sample capacity is exceeded, the peak shapes are influenced and therefore give an indication of the effect. Overloading always shows in fronting peaks and influences the resolution within a chromatogram. For accurate analyses (robust quantification, etc.) overloading should be avoided.

Henry’s Law (Equation 1) describes thermodynamically mixtures of gases in liquids. It says: “At a constant temperature, the amount of a given gas dissolved in a given type and volume of liquid is directly proportional to the partial pressure of that gas in equilibrium with that liquid.”

For dilute mixtures, the relation is linear and is the basis of the ideal Gaussian peaks shapes. WCOT columns have high phase ratios, meaning that the stationary phase is the minority phase.

Overloading occurs when the sample capacity of the liquid phase is exceeded; Henry’s Law is no longer valid and deviates from linearity. There is more sample present in the carrier gas and this sample is transported with the carrier gas flow to the end of the column and arrives there earlier than expected. The peak shows fronting. 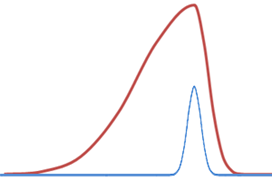 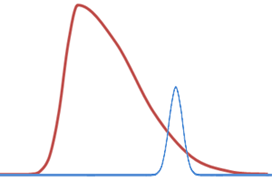 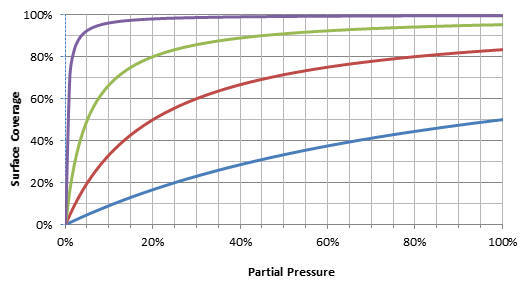 With increasing partial pressure, the surface cannot adsorb sample components any longer. The active places are already occupied, and the overloading happens then in the gas phase, producing often a triangular peak shape. The peak starts earlier than expected and the peak ends at the normal position. Due to the shape it seems that the peak shows tailing, which is not the case (see Figure 1b). The best region for separations on PLOT columns is in the linear range of the Langmuir isotherm. In the example here: up to 100% in the partial pressure range for the blue, 20% for red, 5% for green and 2% for the violet line.

The sample capacity is for every combination of sample component and liquid or solid phase different. For the liquid phases, imagine the solution of salt and sugar in a glass of water. The maximum solubility for salt is ca. 380 g/L, whereas for sugar it is ca. 675 g/L.

To make it even more complicated, the maximum salt (sugar) solubility in water at 20 °C is 380 g/L (675 g/L), but 400 g/L (810 g/L) at 90 °C. The solubility is temperature-dependent and changes along the temperature program in a gas chromatographic run! For gases, there is also a pressure-dependence, because in equilibrium the gaseous component would rather dissolve in the phase than being in the carrier gas.

But there is also a positive point; the sample capacity is independent from the number of different components. In the salt/sugar example, the water would dissolve 380 g salt and 675 g sugar in 1 L at the same time.

In the empirical and pragmatic theory of mass capacity, the maximum amount of component can be estimated by Equation 4:

The characteristic constant, a, can be determined by experiments. The sample capacity is also dependent on the size of the component or rather its retention factor. The bigger the retention factor, the smaller is the sample capacity. In the picture of size, bigger molecules occupy more space in the phase and, therefore, you need fewer molecules to saturate the phase (see Figure 2). 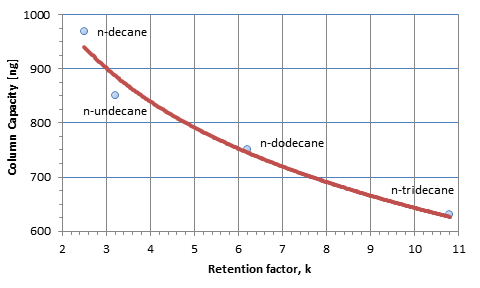 Overloading in its extreme form is called flooding and flooding effects distort peak shapes until they are almost unidentifiable. They lead to peak shapes that almost look like Christmas trees and the effect is also called the Christmas-tree effect. It is related to too much injected volume and miniature temperature variations in the mix zone, giving much peak splitting.

tR = retention time
b0.5 = peak width at half height

There is a solution to all overloading effects: reduce sample amounts or increase the amount of phase.

To avoid overloading in gas chromatography, you can: