Dr. Know over 2 years ago | Last modified by

Dr. Know over 2 years ago

Derivatization is a technique used in chemistry, which transforms a chemical compound into a product of similar chemical structure, called a derivative.

Generally, a specific functional group of the compound participates in the derivatization reaction and transforms the educt to a derivative of deviating reactivity, solubility, boiling point, melting point, aggregate state, or chemical composition. Resulting new chemical properties can be used for quantification or separation of the educt. Derivatization techniques are frequently employed in chemical analysis of mixtures

That means derivatization is “wet“ chemistry.  Though chromatographers may not prefer this type of chemistry, it is quite often used for specific purposes, as mentioned in the first paragraph of the word definition. Something similar, but different.

In HPLC, derivatizations can be more complex than their GC counterparts, because of the condensed state in which everything takes place. Increasing volatility is only a possible issue for LC/MS applications. Where-as all derivatizations in GC are pre-column, in HPLC you also can have post-column processes.

Pre-column derivatizations are carried out as off-line chemical reactions between reagent and sample prior to the injections on the HPLC column.

If volatility is not the issue, then detectability is. The classic detector in HPLC is the UV detector, so com-ponents need to be UV-active to be detected. If the molecule is not, you need to insert so-called chromophores into the molecules. Reagents that do this are called chromotags.  This table lists common chromotag reagents:

All of these reagents carry at least one aromatic ring or even larger pi-electron systems, which are responsi-ble for the UV detection. Dabsylchloride can, for example, be used to derivatize amines, thiols, imidazoles, phenols and alcohols. 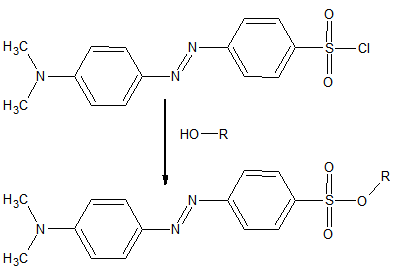 A typical procedure is as follows:

General procedure: Derivatives are formed within 30 minutes at room temperature or at 70 °C in 10 minutes in acetone, buffer or acetonitrile.

Besides the standard UV detection, fluorescence detection is also often used in HPLC. Chemical reagents called fluorotags are used to introduce groups with fluorescent properties into the molecules. Table 2 shows a list of common fluorotag reagents:

A typical procedure for chloroformate reagents is as follows:

In the absence of water: Add 5 µL of the chloroformate to 2-10 µL of the sample in acetone in a mix-ture of acetonitrile/pyridine/alcohol (22:2:1, alcohol: methanol, ethanol or chloroethanol) and shake for some seconds. Inject.

In the presence of water: To 50 µL of a pyridine-water solution (5:1), 50 µL acetonitrile/ethanol (2:3) and 5 µL chloroformate are added. Extraction is performed by 100 µL hexane and 200 µL water. In-ject an aliquot of the hexane layer.

Post-column derivatizations are online chemical reactions, carried out after the separation has taken place and before the component enters the detector:

An example for the method used in Figure 4 is the post-column fluorotag derivatization of sulfonamides [1]:

Figure 5: Post-column derivatization of Sulfanilamide (blue) with benzene-1,2-dicarbaldehyde (OPA) and 2-sulfanylethanol. The exitation can be measured at 302 nm and the emission at 412 nm wavelengths.

Another possibility for post-column reactions are immobilized enzyme reactors (IMERs), where an enzyme is used to catalyze certain reactions before the component goes to the detector. An example is the reaction of acetylcholine to choline and the oxidation from choline to carboxy-N,N,N-trimethylmethanaminium, an acid and hydrogen peroxide, that can be easily detected by an electrochemical detector down to low picomole/femtomole levels [2]. The first reaction (1) is catalyzed by acetylcholine esterase and the second (2) by choline oxidase, two enzymes immobilized in the IMER reactor.

Figure 6: enzyme-catalzed derivatization from  acetylcholine to choline and the corresponding acid.

If you inject a sample together with an unreacted  derivatization reagent or their reaction products, it can happen that the  baseline noise increases, but normally the detection is so specific that the  sensitivity still increases.

For post-column systems you will need another pump for the  reagent and the mixing/reaction chamber.

Compared to the amount of standard reagents in gas  chromatography, the amount for HPLC reagent is enormously higher and you have  lots of specific reactions for specific components. In fact, every reaction in  organic chemistry may be a derivatization reaction for HPLC components.

Derivatizations in liquid chromatography are used to: