Sometimes sub 2 micron particles aren't the magic bullet - when is another column better?

Hello again! This week we have a guest post from my colleague, Mike. Mike is one of our field applications scientists who spends lots of time helping customers to select columns and optimize and troubleshoot their methods. When I asked him to write a guest post, he sent the following article with the title “Lessons Learned from an Average Chromatographer,” however Mike is anything but! He comes to biomolecule separations by way of GPC, making him particularly good for challenges with SEC or large molecule samples. Here’s what Mike has to share with us:

To find the answer to this question, I was led down the path of the Van Deemter equation:On any given day, superficially porous particles (SPP) can provide strong competition to today’s advancements in sub two micron (STM) stationary phases as it applies to resolution. For those who may not be familiar with SPP columns, the concept is simple. In contrast to having a fully porous stationary phase, SPP columns are composed of a solid silica core with a thin porous outer layer that allows for quick mass transfer. I have always been aware the SPP columns were able to yield near UHPLC performance with the added benefit of low backpressures, typically in the 400 bar range. What I have recently questioned however is why in today’s age of 1200 bar LC instruments do so many column vendors position SPP solutions over STM for larger biomolecule separations?

To find the answer to this question, I was led down the path of the Van Deemter equation:

Where the plate height (H) is a function of linear velocity (u) and A, B, and C are constants that describe band broadening by eddy diffusion, longitudinal diffusion, and resistance to mass transfer respectively.

When SPP column stationary phases were first conceptualized, the target application was indeed large biomolecules and improving resolution. The focus on the Van Deemter equation was placed on the C constant or the resistance to mass transfer. In the early 2000s, shortening the mass transfer distance using a thin porous layer proved to yield tremendous results for both large and small molecules alike as it applied to sharper peak shapes. This was mainly due to the comparison against fully porous ~3 µm materials. However, a short 10 years later advancements in HPLC instrument technology lead to instruments capable of handling higher backpressures, and to go along with this instrument design the rise of sub-2-micron particles began. When SPP columns were compared to the shorter mass transfer path of a STM column, results were similar if not better for small molecules on the newer STM technology. Yet for larger biomolecules SPP columns still maintained their superiority. The question was, why?

What I learned is that the C term in the Van Deemter equation is a constant consisting of both resistance to transparticle transfer (or in and out of the depth of the pore) as well as interparticle transfer (or the effect of the thin mobile phase layer covering the particle’s inner and outer surfaces). Small molecules do not seem to be as adversely affected by this interparticle resistance as larger molecules are. Because an SPP has a smaller pore depth than fully porous STM columns, there is less interior surface area with this mobile phase layer. This means that the effect of the solvent layer mass transfer is mitigated, allowing for higher resolution when analyzing large biomolecules on SPP columns.

In the end, my advice is, when analyzing larger biomolecules don’t be so quick to grab an STM column. Though it is tempting to maximize your UHPLC investment by employing STM columns, SPP may yield better peak shapes and greater resolution. This is also with all that we have come to love about SPP, such as lower backpressures yielding instrument platform flexibility and larger frit pores to prevent blockage and longer column lifetimes. As technology continues to develop on superficially porous particles, the future of large molecule separations is now looking even more exciting. This is because, due to their larger solid core size SPP can accommodate larger pore sizes up to 450 Å, maximizing available surface area to drive resolution even further. 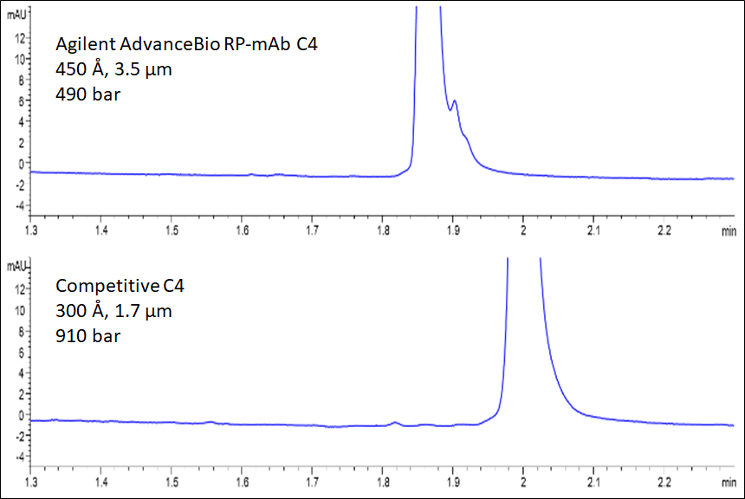