UV, MS, TFA, and Formic Acid – What to use? Peptide Mapping Part II

Some combinations of mobile phases and detectors give better results than others - learn why here.

For ages reverse-phase separations, including peptide mapping, have been done with silica-based C18 columns and TFA added to the mobile phase.  But with more labs using MS detection for peptide mapping, columns that perform well with formic acid rather than TFA are gaining popularity.  Have you ever stopped to think about what TFA or formic acid is doing in the separation?  I confess as a mass spectrometrist I knew I wanted to avoid TFA because it would cause ion suppression and hurt sensitivity, but I had never really thought about the role it plays in the LC separation.

To understand what’s going on with these acidic ion pairing agents we need to look at the dissociation constants of silanols relative to these acids.  The pKa of residual silanols is very similar to the pKa of formic acid, so there will be a mixture of protonated and unprotonated sites on both species when using formic acid mobile phases.  TFA is a stronger acid, so it dominates, giving up its proton and fully protonating and neutralizing the silanols. 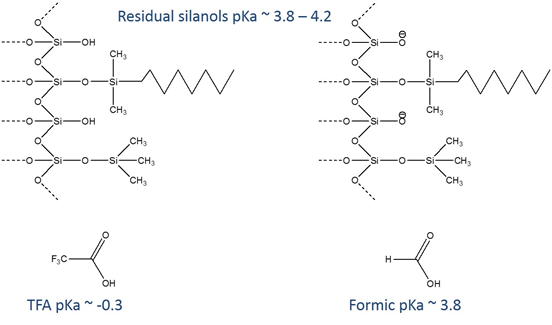 Column manufacturers go to great lengths to block these residual silanols (that’s what’s going on when you see columns described as “end-capped”), but the reality is that it’s extremely difficult to do completely.  At the moderate acidity (pH ~ 4) of formic acid mobile phases, these negatively charged silanols can have undesirable ionic interactions with positively charged proteins and peptides, leading to tailing and poor peak shape.

TFA is a strong enough acid that these silanols are neutralized, the TFA anion forms ion pairs with positive charges on the peptide; the ionic interactions are blocked, and you have a separation that is purely based on the reverse-phase interaction.  Formic acid partially blocks these interactions, but isn’t nearly as effective as the stronger acid. 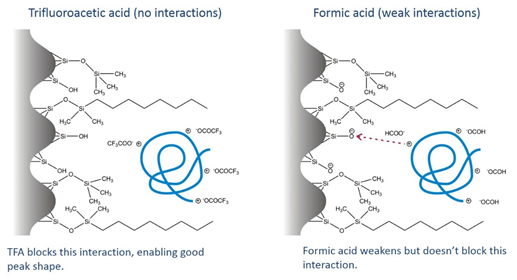 Now, we’d really rather use formic acid for mass spec detection, since TFA causes ion suppression and therefore lower sensitivity.  Ideally we’d like to do that without sacrificing peak shape, so we need a solution to this poor peak shape with formic acid mobile phases.  The approach taken in our AdvanceBio Peptide Plus columns is to chemically modify the silica surface to block the residual silanols and repel positively charged samples.  This allows us to get nice sharp peaks and good peak capacity for peptide mapping with formic acid mobile phases for MS detection. 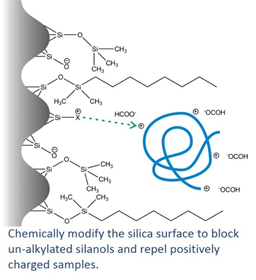 I want to wrap up with a bit of a disclaimer.  I don’t want to convey the idea that you can’t use formic acid with “regular” silica based columns, or that you can’t use TFA with mass spec.  Sometimes circumstances may necessitate these less than ideal combinations.  Maybe you have plenty of sample and can live with some ion suppression, or your peptide map isn’t terribly complicated so you can get by with less than ideal peak shape.  Here’s where understanding what’s going on in your separation allows you to make informed decisions based on your priorities.  As someone who admittedly would really rather forget the endless dissociation curve problem sets that one particular professor assigned to first year grad students, it’s still occasionally helpful to go back to these basics.

Talk to you soon!