Dr. Know over 1 year ago | Last modified by

Dr. Know over 1 year ago

Dynamic effects in chromatography are one of the forgotten chapters in the art of chromatography. We often assume that an injected component stays unchanged during the separation process, but this is not always true. Sometimes there can be chemical reactions or isomerizations taking place during the course of a separation.

The Log P, partitioning coefficient between n-octanol (apolar and hydrophobic phase) and water (polar phase), represents the concentrations of a component in both immiscible phases. In our case, the keto form of acetyl acetone partitions between the two phases in a ratio 8:10, but the enol form has a ratio of 10:4.

If we inject both components in the absence of any intramolecular conversion onto a C18 HPLC column under isocratic conditions, the enol form would have a longer retention time. It is more hydrophobic and would therefore have more interaction with the hydrophobic C18 phase than the earlier, eluting more polar keto form. Unfortunately we are not able to freeze the equilibrium between the two components, so our chromatogram would show us two peaks at different retention times with a saddle in-between (figure 2): 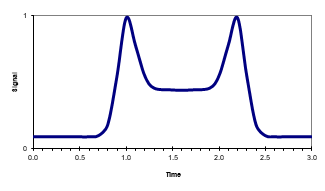 In figure 2, both peaks are equal in height and surface area, which represents an equilibrium ratio between the keto and enol form of 1:1. The saddle comes from a continuous conversion from one form of the analyte to the other (and vice versa) during the separation process.

All reversible reactions, such as isomerizations and tautomerisms, can demonstrate a saddle chromatogram. In gas chromatography there is normally no interaction with the carrier gas, so any reaction must be an internal reaction. In HPLC, the mobile phase can have an influence on the process by donor or acceptor functionality for protons and/or water, for example.

Figure 3 shows a C1 – C6 hydrocarbon mixture, which was analyzed on a CP-Al2O3/KCl column. The peaks at 6 minutes and 13.6 minutes retention time show the typical saddle form. The reaction is an isomerization from propadiene to methylacetylene (propyne) and vice versa (see figure 4):

In this case, other hydrocarbons elute between the two components (retention times 8 to 13.2 minutes) “on the saddle”.

Another example for dynamic effects in GC is formaldehyde when analyzed on porous polymers (catalytic effect). Formaldehyde trimerizes to trioxane (see figure 5) and the chromatogram shows 2 peaks. On liquid stationary phases with thick films like CP-Sil 5 CB or VF-1ms formaldehyde stays a monomer and can be quantified.

In GC are evaporated samples and gas phase reactions, which are pressure dependent. The higher the pressure, the more a reaction shifts to the side of the lower volume component. In our case, three molecules of formaldehyde react to only one molecule of trioxane, so the formaldehyde partial pressure is 3 times higher than the partial pressure of trioxane. That means in the beginning of the run at high head pressure the reaction to trioxane is favorable, but at the end of the run at ambient pressure (or even less in MS systems) the reaction back to formaldehyde is the main path. The ratio between both components changes along the pressure gradient in the GC column. 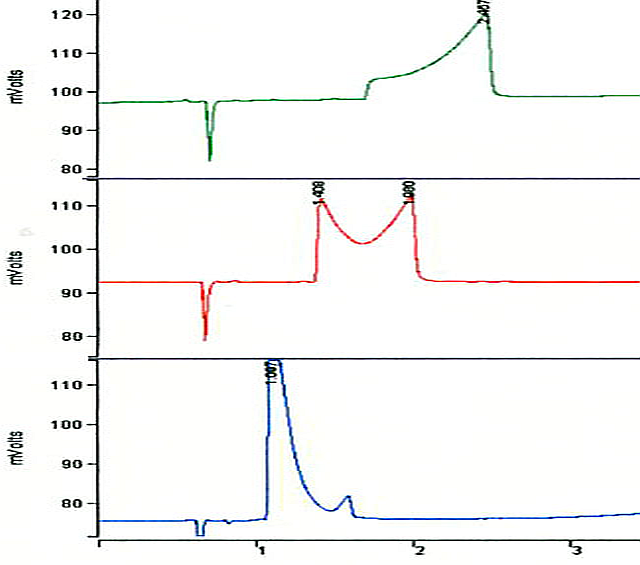 Pairs of strange peak shapes in chromatograms can come from dynamic effects. “Dynamic effects” mean all kinds of reversible reactions of one component to another including isomerizations, shifts of double bonds, condensations or oligomerizations. Typical for dynamic effects is the “saddle”-shape of the 2 peaks in question – one peak with tailing and the other one with fronting (figure 2).