Now that Sandeep has detailed how to make these salty mobile phases for HIC, let’s turn our attention to other method development details. Here’s where my colleague Andy is going to take the lead.

Hydrophobic interaction chromatography (HIC) is rather unique in that it allows separation of molecules based on differences in their hydrophobicity, while they remain intact in their native state. This unique capability means it is possible to separate variants that are difficult to resolve by any other technique. For example, it can separate variants in oxidation state, deamidation, and other species that can arise during post-translational modification.

Water is quite viscous but adding modifiers such as organic solvents (for RPLC) or high concentrations of ammonium sulfate (for HIC) can increase the viscosity still further. This increased viscosity will lead to higher operating pressures and potentially to poor peak shape due to reduced mass transfer. The most commonly used tool to alleviate this problem is to run the HPLC experiment at a higher temperature.

For RPLC, higher temperatures generally have the desired effect: Peaks become sharper as mass transfer improves, and the operating pressure is reduced. Frequently the retention time of the molecules reduces too, however this shift is not usually problematic.

However, in HIC, increasing the temperature can have a deleterious effect. Instead of sharper peaks and shorter retention times, we often see an increase in retention time and broader peaks, which results in loss of resolution: 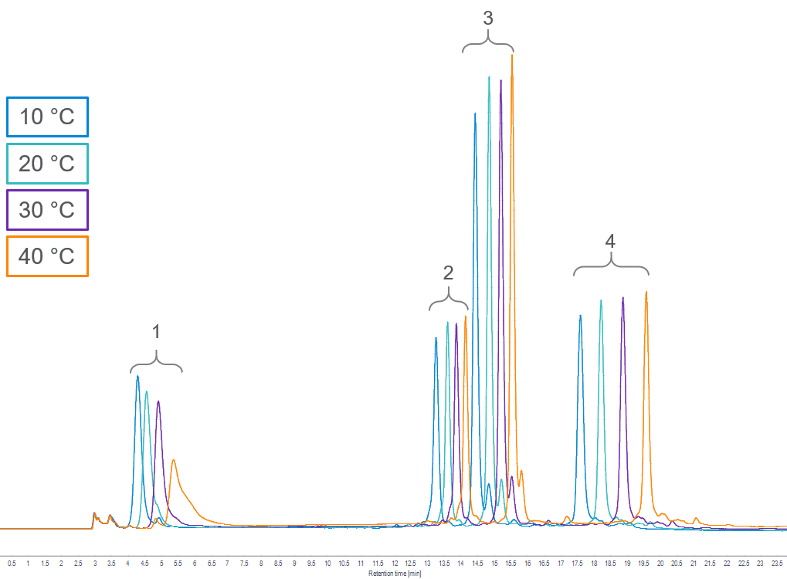 In practice, better resolution is obtained by reducing the operating temperature. It is important to note the severe deterioration in the peak shape of cytochrome C at even the moderately elevated temperature (40 to 45 °C) used in this experiment.

For more practical applications such as oxidized variants of monoclonal antibodies, it is possible to use oxidants to force degrade samples for use in method development. This approach should be used with care since the level of oxidation will vary considerably with choice of oxidant, concentration, and length of exposure time. A typical monoclonal antibody may contain 16 individual methionine residues distributed throughout the molecule (both heavy and light chains); some of these residues will be located in more exposed regions and will therefore react more quickly.

The methionine residues found in the RM 8671 NIST mAb are shown in Figure 2, highlighted in bold. Those in red (the Fc region of the heavy chain, and those in the light chain) have been observed as oxidized variants.

By exposing the NIST mAb sample to tert-butylhydroperoxide (t-BHP), an increase in the number of earlier eluting oxidized variants are seen:

Thanks, Andy! Next time Andy will expand his method development tips to measuring the drug to antibody ratio of ADCs.