Remember having "opposite day" as a kid?  HILIC is sort of like that to reversed-phase chromatography.

Previously we covered a bunch of tips for a pretty standard approach to amino acid analysis – sample derivatization, reverse phase separation, and UV detection.  A couple weeks ago, I mentioned our next topic was HILIC LC/MS for amino acid analysis – which is about as opposite as it gets!  HILIC – or hydrophilic interaction chromatography – is most commonly used in biopharma for glycan analysis, but it’s also a great way to analyze the small, polar metabolites found in cell culture media.

In many circles reverse phase is far more commonly used than HILIC (making it a little silly that HILIC is a “normal phase” chromatography!).  In a HILIC separation, the stationary phase is polar, the initial mobile phase is non-polar, and analytes elute roughly from least to most hydrophilic – the opposite of a reverse phase separation.  You’ll see what I mean looking at the two amino acid separations below.  The top chromatogram is a reversed-phase separation using the AdvanceBio Amino Acid Analysis column.  Leucine and isoleucine, with their aliphatic side chains, are among the last amino acids to elute.  The bottom chromatograph shows a HILIC separation using the recently launched AdvanceBio MS Spent Media column.  In this case you’ll see leucine and isoleucine elute before most of the other amino acids. 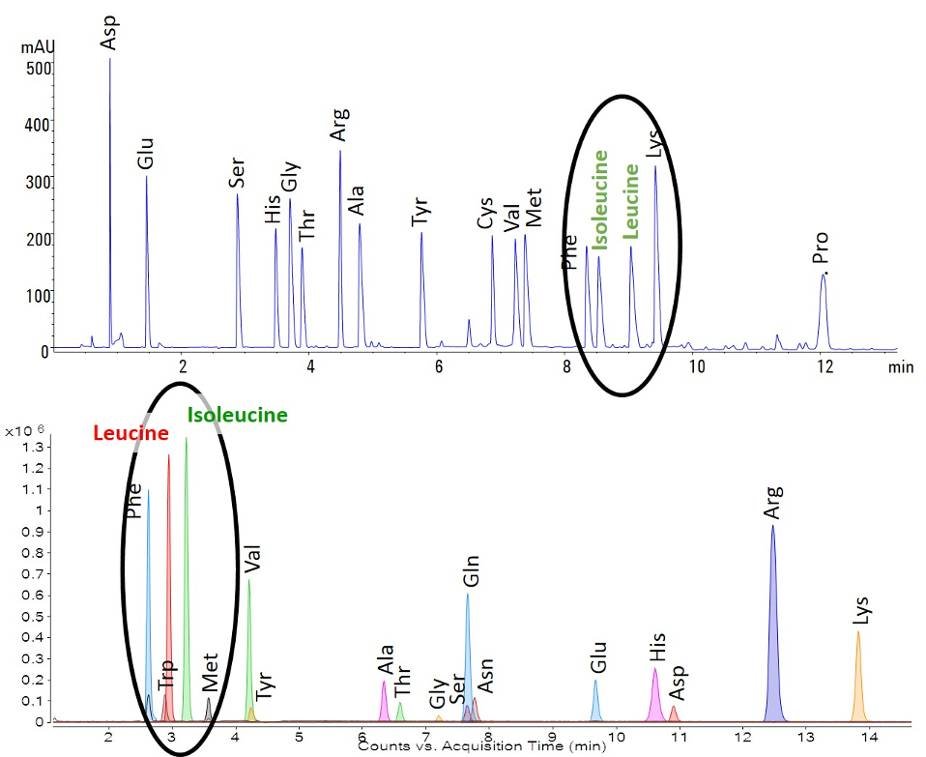 The elution order isn’t the exact opposite, because on this HILIC column the charge of the analyte and pH of the mobile phase will influence retention, but you can see the general idea that more hydrophobic analytes elute earlier than more hydrophilic analytes.

Like the stationary phase, the mobile phases are also flip-flipped from what we’re accustomed to in reverse phase.  Instead of starting with highly aqueous mobile phase, a HILIC separation starts with a highly organic mobile phase – usually acetonitrile.  I personally keep the convention of making Mobile Phase A the aqueous phase, and Mobile Phase B the organic mobile phase, which means that my gradient often starts with 90-100% Mobile Phase B instead of the other way around.  Keeping channel A on the LC aqueous and channel B organic makes it easier to between different chromatography methods on the same instrument.

So, tip number one for HILIC separations – double check, and triple check that your mobile phases and gradient program are configured to start at a high percent organic!  I’ve accidentally mixed things up before, forgetting to change my gradient from starting with 95% A to beginning at 95% B.  And I know I’m not alone!  When the gradient is reversed, nothing is retained - everything elutes in the void volume.

Over the next few weeks we’ll dive into more detailed tips to get the best results from HILIC separations, and analyzing amino acids by LC/MS, but before you start, go check your mobile phases one more time!

Talk to you soon –