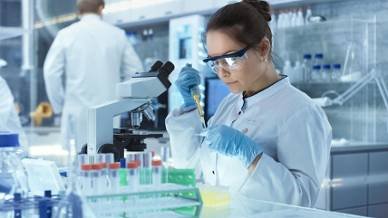 The importance of glycosylation

Many biopharmaceuticals are glycosylated proteins, manufactured by living cell systems in culture. They include monoclonal antibodies (mAbs), fusion proteins, growth factors, cytokines, therapeutic enzymes, and hormones. The post-translational glycosylation of a harvested protein protects it from in-vivo degradation, and has been shown to be crucial for product solubility, stability, pharmacokinetics and pharmacodynamics (PK/PD), bio-activity, and safety.

It’s important to note that protein glycosylation is a multifaceted process in which glycans attach themselves to specific types of amino acids with nitrogen- or oxygen-containing side chains. Protein N-glycosylation starts in the endoplasmic reticulum of the cultured cells, and the resulting glycan chain is transported to the Golgi apparatus, where it is modified and trimmed by a range of glycan processing enzymes. In contrast, protein O-glycan biosynthesis is initiated directly in the Golgi, where precursors undergo derivatization.

In addition, glycosylation can be influenced by the nature of different host cells and the specific culture conditions: media type, pH, temperature, and level of agitation, for example.

Given this complex background, the need for accurate analysis is clear. A range of analytical options have become established to investigate intact proteins, glycopeptides, released glycans, and monosaccharides. Within this spectrum, Agilent’s portfolio of chromatography and mass spectrometry solutions are used to generate structural information, map peptides, and profile glycans.

The watchwords of today’s biopharma industry are efficiency and economy. So, in the case of glycan analysis, scientists value workflows that remove bottlenecks and eliminate variability. There are three stages used in glycan analysis that are common to all analytical approaches—sample preparation, separation/detection, and analysis—and Agilent has taken significant steps to advance all three.

Step 1: Sample preparation.  Glycosylation can be revealed at both the protein and peptide level. However, this process is complex, with clear insight into the carbohydrate itself only possible when the protein or peptide backbone has been removed. Robust and high precision sample preparation is required to ensure that your results are clear, reliable, and reproducible. For that, you need automated tools such as the Agilent AssayMAP Bravo,  a sample preparation platform. The platform has several key features to support the production of high-quality samples for LC/MS analysis. Automating complex sample preparation workflows with precise flow control minimizes any potential for human error.

Step 2: Separation and detection techniques. The primary structure of a glycan is defined by the constituent monosaccharides and glycosidic links and location of nonglycan substituents. The aim of the analysis is often to identify an unknown structure among a range of known structures. However, for glycans from organisms that are less well known, it is more difficult to predict and characterize them. Technology for intact mass and released glycan analysis continues to advance and is a particular area of focus for Agilent.

The Agilent 1290 Infinity II UHPLC system,  along with the Agilent portfolio of AdvanceBio LC columns (in particular the PLRP-S 1000 Å, enables you to perform different kinds of intact analysis, including no digestion, reduced, and IdeS. The Agilent 6545XT AdvanceBio LC/Q-TOF  system has a newly incorporated large molecule SWARM autotune feature to improve analysis of intact proteins. The large molecule SWARM autotune is shown to produce 4X higher sensitivity than the standard system autotune. The device also now includes a fragile ion autotune to prevent unwanted fragmentation of labile molecules, such as glycans. Released glycans can be chromatographically separated with an Agilent AdvanceBio glycan mapping column,  delivering ultrahigh resolution and excellent analytical sensitivity.

And view the AdvanceBio on-demand webinar series in your own time!

For Research Use Only. Not for use in diagnostic procedures.