Chromatography with Supercritical Fluids SFC and Comparison with GC and HPLC

Celso Blatt over 1 year ago | Last modified by

The aim of this article is to show the differences, applications, and advantages between the three chromatography techniques: LC, GC and SFC.

Although chromatography began with large columns of glass where the mobile phase was a liquid (LC) the first major evolution towards modern instrumentation was in GC. This was because the petrochemical industry needed to separate and analyze volatile fractions such as gasoline and diesel. In 1952 partition chromatography was described and began to be used in process analysis and the first commercial GCs were built using the TCD. GC instrumentation is simpler because it doesn't need a mobile phase pump, just have a pressurized carrier gas, and adjust the flow in the column. In addition, need a heated column in an oven, a TCD and a chromatogram recording system.

Modern LC was described in 1969, but modern instrumentation as we know it today took a long time to develop and become reliable and robust. Between the 1980s and 1990s it became well known and gained fame and the name HPLC, (High Performance Liquid Chromatography).

SFC was first described by Ernst Klesper in 1962 and suffered the same initial problems as LC, lack of proper and reliable instrumentation. Only from 1992 began commercial production of the SFC based on the platform of a GC with capillary or packed columns.

The changes in the chromatographic columns used in GC, HPLC and SFC is the way the stationary phase is deposited inside the column.

At figure 1 below, in a capillary column generally used in GC, the stationary liquid phase is deposited and attached to the inner walls of the fused silica tube. 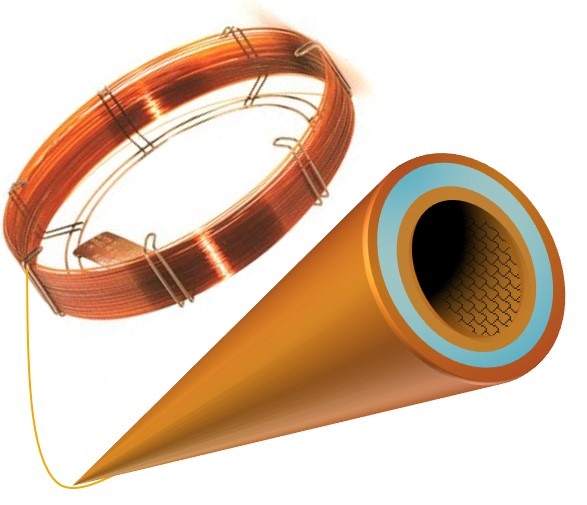 The columns used in LC are packed with silica microspheres and the liquid stationary phase is impregnated and trapped inside and on the surface of these microspheres. These particles have many pores through which the mobile phase carrier the substance into the particle and where the partitioning process takes place. The larger the surface area of these particles, the larger the partition in that column. The figure 2 below illustrates a packed LC column where two compounds A and B are separated by partition in the packed microspheres of that column.

In SFC the columns can be the fused silica capillaries used in GC and the packaged ones used in LC, that is, it does not have specific SFC columns because they are located between the two chromatography’s GC and LC.

The mobile phase used to transport the molecule through the column is what defines the type of chromatography and will be GC, LC or SFC.

GC always uses a gas as a mobile phase and that gas is usually hydrogen, nitrogen, or helium. In this case, the mobile phase does not interfere with the separation and should only transport the molecules that are in the gaseous phase. GC applications depend on the molecule's ability to survive and not degrade in the gas phase.

SFC uses neither a gas nor a liquid as a mobile phase. The mobile phase is a substance that is between the liquid phase and the gas phase, described as a supercritical fluid. The figure 3 shows a phase diagram for carbon dioxide (CO2) at different temperatures and pressures. The triple point is where at this temperature and pressure the gas, liquid and solid phases coexist. Above that triple point there is a line that separates the gas phase and the liquid phase from CO2. But above 31° C and 74 bar this line disappears and from that critical point we have CO2 in a supercritical state. In this supercritical state, CO2 has a density close to a liquid, but with viscosity and diffusion coefficient close to a gas. These three characteristics are the great attraction for SFC. High density allows better solubilization and helps partition in the column. Viscosity and diffusion close to a gas allow for faster analysis and less peak widening even with packed columns. 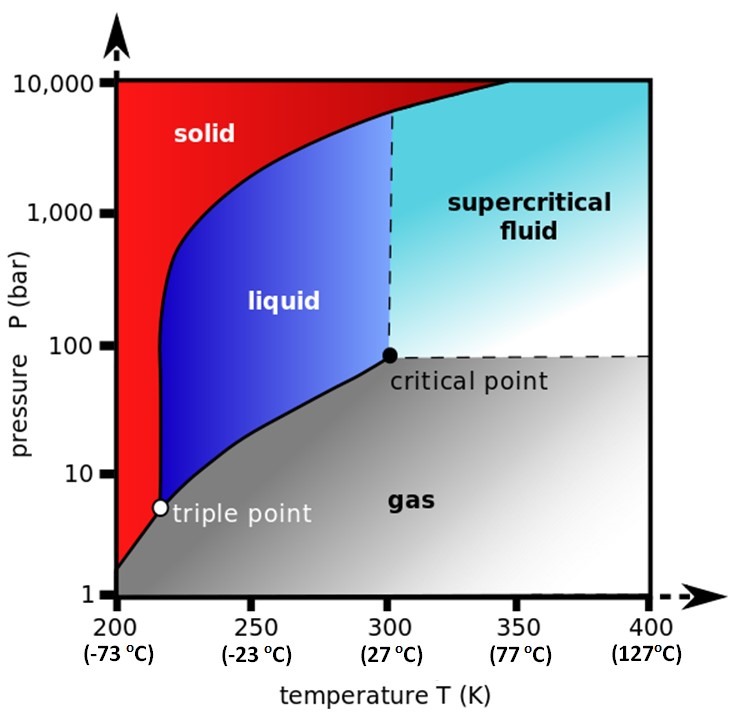 The CO2 used for SFC can be supplied by regular liquid CO2 cylinders with dip tube. Even the CO2 used to aerate drinks can be used because when liquefying the CO2; his quality is excellent.

Water is an excellent solvent for chromatography, but its critical point in the diagram above is 374° C and a pressure of 227 bar. These conditions make it impossible to use water as a mobile phase in SFC. Because it has the lowest critical point, CO2 is very easy to use and has other advantages such as being inert, not being toxic in the gas phase and slightly miscible with water. The disadvantage of CO2 is that it is nonpolar, and we can say that equivalent to heptane in terms of polarity.

To help this lack of solubility in the mobile phase for more polar compounds in SFC; mobile phase modifiers are added, and methanol is the most used example. The amounts of methanol added in the mobile phase are low and around 1 to 10% in CO2. They can be pre-mixed with CO2 or added with a regular LC pump as if it were a gradient. Of course, as in LC, other gradient modifiers and tertiary systems are also used in SFC.

The figure 4 shows that for any packaged column geometry, any particle size and k ’, the SFC always has the advantage of being faster than the HPLC. 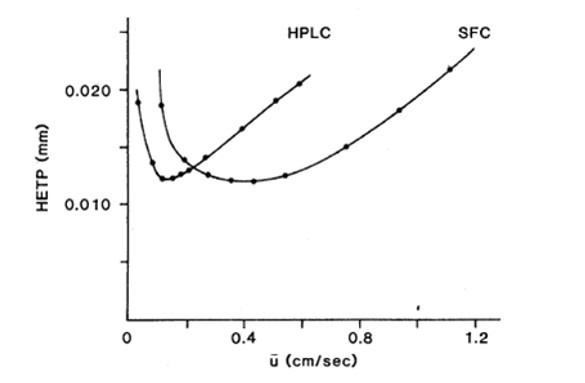 Regarding the SFC instrumentation, see in the figure 5 the first SFC commercialized in 1992 that was mounted on an HP5890 GC and used fused silica capillary columns. The refrigerated liquid CO2 pump was on the right side. At that time, we already had the option of adding modifying methanol with an extra liquid pump. The detector was the traditional GC by flame ionization (FID). To operate the SFC, it is necessary to maintain the temperature and pressure above the critical level throughout the column. Even producing pressure at the beginning of the capillary column, it is necessary to ensure that this pressure remains the same until the end of the column. To maintain pressure in the column, a capillary restrictor is used between the end of the 250 micron capillary column and the FID jet, which is a capillary tube with an internal diameter of 10 to 50 microns. This restrictor needs to be heated because the CO2 leaving this capillary expands and cools the restrictor and can become clogged if not heated. 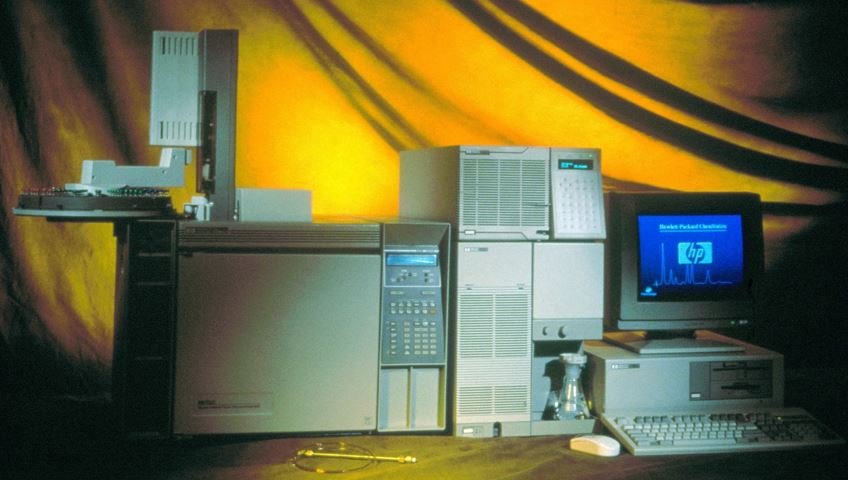 Figure 5. First commercial SFC based on a GC.

The HPLC has the additional liquid pump for the modifiers, an automatic injector, a mixer to make the gradient with CO2, a column compartment, and a DAD. To the right of the HPLC is the liquid CO2 cooled pump.

The DAD detection cell must withstand high pressures, it cannot be a conventional cell. In addition, we must also maintain that pressure above the critical point along the column and detector. To maintain this pressure, an automatic and heated valve is used after the detector that is in the box where the CO2 pump is.

The SFC in the figure 6 below, can operate as a conventional HPLC or SFC, with just a change in the software. To read more about this hybrid instrument, visit the link: https://www.agilent.com/en/product/liquid-chromatography/hplc-systems/application-specific-hplc-systems/1260-infinity-ii-sfc-uhplc-hybrid-system 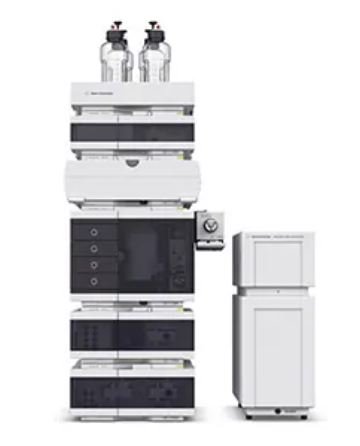 The advantages of SFC over HPLC are:

- The SFC is three to five times faster than the HPLC

- SFC is a technique orthogonal to the reverse phase HPLC

- The SFC has a lower operating cost compared to the HPLC

- SFC is a green technique and can recycle CO2. Does not use acetonitrile and uses fewer modifiers.

Regarding SFC applications, it is common to say that it is the preferred technique for the separation of chiral compounds. In addition, there are numerous SFC applications, and the idea is to bridge the gap between GC and LC.  See below the main types of substances that can be analyzed by the SFC:

- Analytes with mass up to 25,000 can be separated with CO2 mobile phase

Now in the figure 7 below the applications of SFC compared to HPLC. 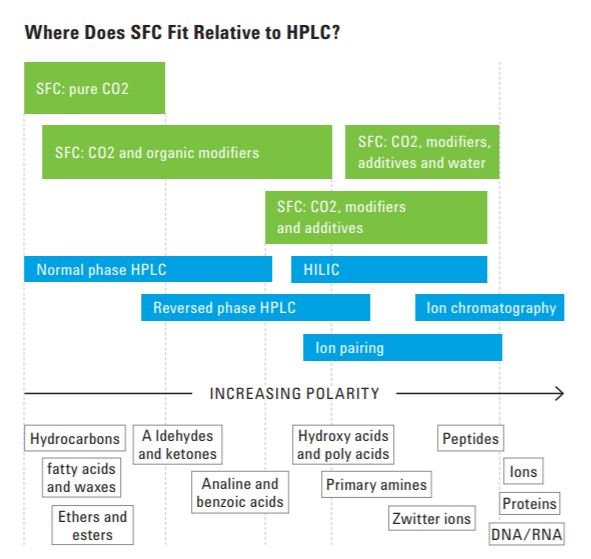 The recommended reading on SFC, to learn more about applications and uses, is in the 186-page PDF book called “Supercritical Fluid Chromatography Primer” at the link: https://www.agilent.com/cs/library/primers/public/5991-5509EN.pdf