Vial leak using 7697A HS autosampler, but only when "Barcode Reading" is enabled

CBM over 1 year ago

First off, it is not the barcode reading that causes the vial leaking, but my best guess is that the barcode reading introduces a variable time, that then can cause a scheduling conflict. This scheduling conflict is then not handled, and the 7697A is forced to remove the vial that is being pressurized, because another vial is arriving late to the oven.

Sometimes three vials in row are leaking completely, that is, the dynamic leak test reports leaks around 50 mL/min, and the recorded data is FID noise. Visible, these vials are fine and there is a visible needle puncture. If these vials are resubmitted for analysis, there is no leak issue and the FID signal is as expected, with front peak and then analytes and ISTD peak.

This issue is observed with our analyses of ethanol using HS-GC-FID. The relevant HS method settings are the ones affecting the sampling scheduling

This works better with more HS vials, but the minimum to demonstrate this issue properly is 12 vials. The vials can be empty, but should not be labeled with a readable barcode.

The GC method is not important, but should (of course) not abort the run, so use 2 min or less run time, with constant oven temp. and constant flow.

Now submit the vials as a sequence first with barcode reading enabled, this run is expected to contain multiple vial leaks.

I've not seen the first two samples leak, but only the last four samples are safe, since there are no vials entering the HS oven to interrupt their pressurization.

Video (Youtube): Agilent 7697A lowering vial into oven while pressurizing

The short GC cycle time combined with every barcode reading failing (due to no barcode) seems to exacerbate the scheduling issue. I believe it is a scheduling issue, since a vial, "Vial X" will end up leaking when another vial, "Vial Y" is moved to the oven while Vial X is supposed to be on the sample probe.

In the activity log, the line "Vial Y moving from the shutter to oven position #" is observed between the "Vial X beginning extraction cycle 1 of 1" and "Vial X extracting" lines.

Based on Figure 5 in Agilent 7697A Headspace Sampler - Advanced Operation, Vial X should be on the sample probe between the log events: "Vial X beginning extraction cycle 1 of 1" and "Vial X purging". 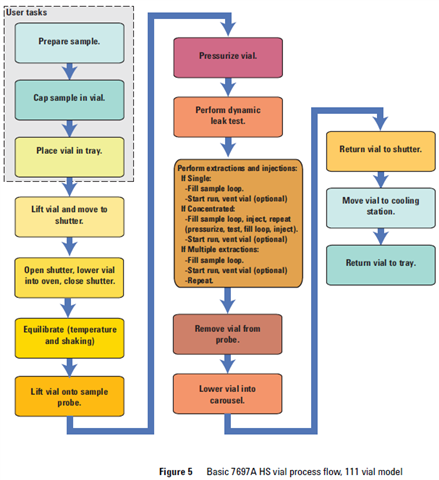 In our routine method, using 16 min oven time and 4 min GC cycle time, the move to the oven of Vial Y when Vial X is lifted onto the sample probe is possible, since it would be the 4th vial, and the oven position of the sample probe and the shutter is offset by 3. However, with the suggested method for reproducing this issue, Vial Y should not be able to enter the oven (yet it does), since the oven carousel should be blocked from turning to the correct position, unless Vial X is lifted down from the sample probe prematurely, which would explain the vial leak!

Parents Reply Children
No Data
Was this helpful?
Thank you for your feedback!
×
We are glad this was helpful! We are sorry this was not helpful. If you still need assistance please create a community post or contact support. To help us improve, please provide any additional feedback. For full details of how we will treat your information, please view our privacy policy.
Privacy Statement Terms of Use Contact Us Site Help