We have had a recurring issue with our Chemstation software connected to our Agilent 1260 Infinity II systems. The problem is not new, it has happened sporadically since the instrument and software were installed about a year ago, but has now become more and more frequent.

During a sequence run, Chemstation online stops working haphazardly, displaying a message with scarce information (something like 'Chemstation has stopped working'). The only option is to press 'Close program' and the software then shuts down. Despite Chemstation online being closed down, the instrument keeps running on whatever flow/gradient that was on at the time the shut-down message occured, but the sequence is not continued. After restarting the software it works just perfectly fine, i.e. until it happens again. This is extremely frustrating when you plan to run over-night sequences and it stops somewhere in the middle of it.

I have not been able to see any connection with any particular instrument action, this may happen for the 2nd or the 38th sample in a sequence, for all kinds of methods, it may pop-up as a new injection is being made as well as in the middle or the end of a run. It has happened every day the last week, but sometimes it has been working fine for several weeks in a row. We have the same issue for two systems with the same Chemstation version but with varying frequency.

Does anyone recognize this problem or have any suggestions of how to resolve it? 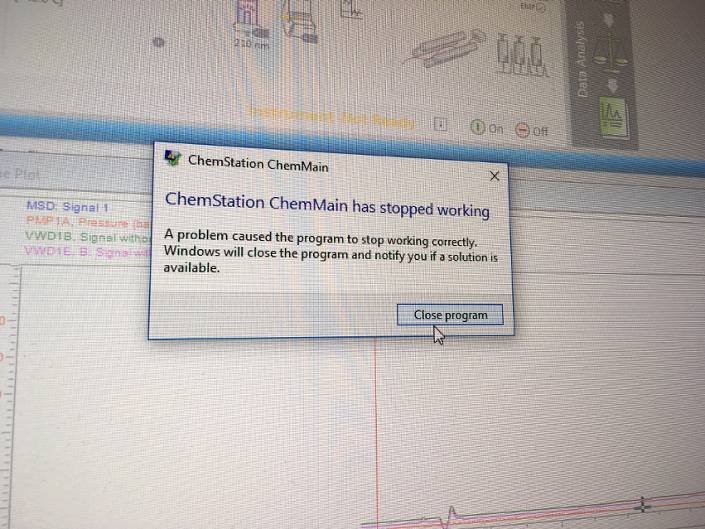