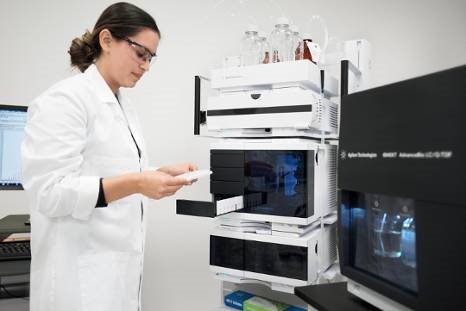 In a previous HPLC article, we looked at autosamplers – next up is troubleshooting HPLC degassers.

As the name suggests, the role of the degasser is to degas the eluent systems. It removes dissolved gases, which are the main cause of noise and cycling in the baseline, as well as poor compressibility of the eluent.

Online degassing is most common in modern HPLC instruments, and most manufacturers will provide an online degassing unit. It isn’t the most efficient system, but serves a purpose usually.

As it is deployed online, the mobile phase is degassed immediately before use – an advantage over offline systems, which are not as effective. The mobile phase enters gas permeable tubing that is held in the vacuum chamber, and dissolved gases are drawn into the vacuum chamber. Once the pressure exceeds the preset threshold, the solenoid valve will open, allowing the pump to re-establish the vacuum.

It’s important to be aware of potential issues in your system to help with effectively troubleshooting HPLC degassers.

Refluxing is the most effective method of degassing, but it’s a long process and there are some risks when degassing large volumes. For that reason, it’s rarely used.

Helium is also efficient, but it is expensive. It also throws up issues if there’s too much helium passing through the eluent system. Bubbles appear at the surface, resulting in as much gas entering as that being outgassed.

The least-favored method is ultrasonic degassing. It lacks efficiency and can cause loss of volatile mobile phase components.

There are some signs that could indicate potential problems with your HPLC system. Here are some things to look out for when troubleshooting HPLC degassers:

• Cycling of output – either in pressure or on the baseline of your chromatogram – may suggest that you’re not getting sufficient compressibility on the pump heads. It can lead to issues such as:
- Insufficient degassing performance – you could use two degassing chambers in chain to increase degassing performance for certain solvents.
- Introduction of more air into the system due to improper tube connections to or from the degasser.

• An increase in noise in the baseline can indicate potential issues, such as:
- High gas load, resulting in short term noise.
- Long-term baseline noise (wander) could also be the result of contaminations being flushed out of the degasser due to partial blocking of the flowpath.
- The issues associated with cycling of output could also be applicable here.

• Leakages – often as a result of different materials used by manufacturers. For example, using THF as the eluent component dries out the membranes of the semipermeable tubing, causing cracks and leaks. Leakages could also be due to improper seated tube connectors going in and out of the degasser.

• Vacuum pump – if you can hear the pump cycling on/off, it’s a good sign. However, if it stays on, that may be indicative of an air leak. If you can’t hear it at all or are experiencing other issues, there might be a problem. However this is only valid with `old` degasser types, newer degassers work on the principle of a continuous vacuum level, with the vacuum pump running constantly. An internal (proportional) valve regulates the amount of (fresh) air that goes into the system to keep a constant vacuum level.

• Blockages – lead to pressure ripples as the pump does not receive the provided flow of solvent supply. The pump gets forced to pull the solvent into the pump head, which leads to cavitation effects.
- Blockages can also be due to algae growth, either in the degasser itself or in the solvent reservoir. To avoid this, use clean solvent and regularly flush all lines, especially if a 100% aqueous solvent is used. It should also be done if you shut down the system for several days, e.g. over a weekend.
- Blockages could be due to the buffer used, so remember to filter solvent sufficiently before entering degasser to avoid crystallization.
- Troubleshooting for blockages is straightforward – carefully disconnect the outlet tubing and check for solvent constantly dripping out. Blockages can also be in front of the degasser, meaning the solvent inlet filters in the solvent bottle.
- Troubleshooting the degasser always needs to be linked with troubleshooting the mobile phase. Feeding the degasser with an inferior mobile phase will create inferior results.

Monitoring your HPLC system for potential issues can help to avoid prolonged periods of downtime. Troubleshooting HPLC degassers is one way to ensure continual running of your system, so be sure to reread this article if you’re experiencing any issues.